Kawaii
Pastel
Queercore
Femboy is a type of boy who exhibits characteristics or behaviors considered typical of a girl. Common characteristics include wearing feminine clothing and engaging in games and activities that are physical in nature and are considered in many cultures to be unfeminine or the domain of boys.

Effeminacy has been used throughout history, backtracking all the way to Ancient Greece and Rome. The slang "femboy" originated in the 1990s to describe effeminate men who represent femininely by wearing skirts, thigh highs, and other various feminine accessories. Femboys have recently become more popular on social media.

Some femboys identify as part of the LGBTQ+ community and are gay and/or queer. However, you do not need to be LGBTQ+ to be a femboy. Anybody of any background, lifestyle, and orientation can be a femboy.

The femboy visual most often includes things such:

Femboy fashion consists of outfits considered to be "feminine." Things such as:

Femboy-style makeup can be anywhere from none at all to heavy. Some makeup styles can include: 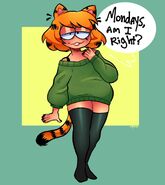