Rejection of the past traditions, motion in real life

Fauvism was an art movement that existed in the early 1900s. The movement clearly broke from Impressionism, as well as other traditional techniques, with its use of bold brushstrokes and vibrant colors.[1] Fauvism was heavily inspired by van Gogh, Paul Gauguin, Georges Seurat, and Paul Cézanne; it was led by Henri Matisse and André Derain.[2]

In contrast to Impressionism, which regularly featured light brushstrokes, Fauvism featured thick brushstrokes that created a flat picture made up of fragments of shapes.[3] What appeared in art was simplified forms of real life, which further emphasized art as being upon a flat surface.[4]

Another important aspect of Fauvism was the use of vibrant colors, which were often taken straight from a tube of paint. Colors did not need to correspond to real life; instead, they were based on the artist’s feelings and experiences. This use of color thus emphasized mood.[5].

In the early 1890s, Henri Matisse and other future fauvists came to the studio of the symbolist painter Gustave Moreau to learn. Here are some of the influential names:

He followed a path of his own that did not stray too far from the route traced by Picasso, his future rival, who wouldn´t have come Primitivism that led to Cubism without Derain's advice to visit the Museum of Man. The funny thing is that between 'The bathers', very sculptural, by Derain, and 'Las señoritas de Avignon', by Pablo Picasso, there were only a few months and both did not know what the other was doing.

Braque, who travelled to Paris to get the title of broad brush painter, was one of the last to arrive to the movement and one of the first to walk towards abstraction. Without wanting to, its landscapes became more Cezanian and augured a new course that took shape after 1907, when after another Autumn Salon each of the members of Fauvism took their own journey.

In his beginnings he practiced Realism, with a traditional style and made copies of masters from the Louvre Museum. He was influenced in his painting by Vincent Van Gogh, Paul Gauguin, Persian ceramics, African art and Moorish fabrics. The most characteristic features of Matisse's style are summarized in his personal appreciation of color in relation to the line, in his way of synthesizing figurative elements, in his contempt for the representation of classical space, and in the undulating arabesque rhythm that prints to many of his most characteristic compositions, related to the symbolist painting of his master Moreau and Art Nouveau. His compositions show an exquisite care, he believed that colors should express feelings and convey emotions. "I do not literally paint that table, but the emotion it produces upon me." 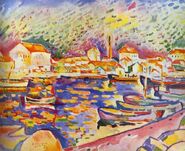 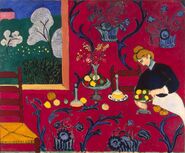 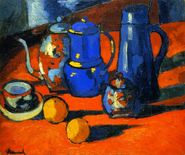 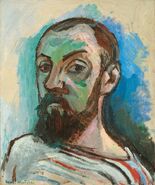 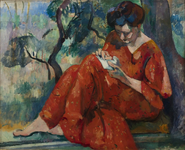 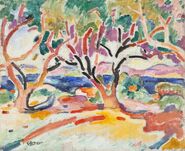