Aesthetics Wiki
Register
Don't have an account?
Sign In
Advertisement
in: Academia, Schools, bookstores, and libraries, Candidates for Deletion

Jane the Virgin
English Major is an academia aesthetic based on people who pursue a college degree (usually a BA but sometimes an MFA) focusing on English. This can be a generalized English degree or a more specific one such as English Literature or Creative Writing.

The English Major aesthetic has a more lighthearted and humorous tone than similar aesthetics like Dark Academia. It should not be confused with Writer Academia, although some English majors are writers.

English literature was first studied at universities in France and Germany in the mid 19th century. It was not until the 1970s that American universities created English major programs.[1]

The English major is stereotyped as a "useless" degree, which can make it difficult for English majors to find jobs.[2] [3]In reality, English majors gain skills such as persuasive writing and research, which are useful in a wide variety of careers.

Within the English studies community there is a movement to move beyond the boundaries of the traditional Literary Canon, which tends to contain authors who are mainly straight, cisgender, male, and white. The idea of literature which explores so called universal experiences and uses universal reference points has also been criticized for that reason. Ironically, literature was created by women.[4]

The most prominent stereotype is that English majors cannot do math.

English Majors are stereotyped as alcoholics. This is possibly because many famous writers, such as Ernest Hemingway, were alcoholics.

An English major is also stereotyped as an upper middle class degree, as there is less assurance of immediate work after graduation compared to degrees such as Business.

Included here are works originally written in English from British and American writers are studied as part of the curriculum for English majors. Film adaptations of well-known books and plays are not listed, as it would make the list too long. Other media listed focuses on writers, books, and bookstores. 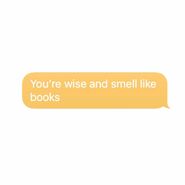 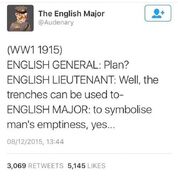 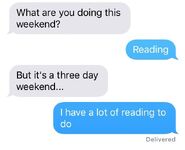 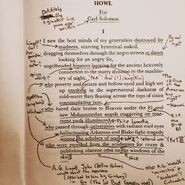 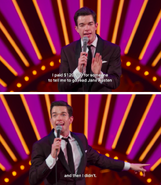