Grimoire
Dolly Kei (Japanese: アンティーク, meaning "antique") is a Japanese fashion style that was influenced by European clothing and antique dolls; fairy tales, Romani culture, and peasants from the Middle Ages were also influential. While Grimoire, a shop, was influential in the creation of Dolly Kei, Dolly Kei itself is not very brand focused.

An outfit must have a vintage look to be considered Dolly Kei. It is also characterized by a dark appearance, layering, lace, embroidery, animal fur (usually faux), as well as large accessories based around creepy fairytales. Some argue that large accessories are the most important part of this style. The fabrics are usually heavy and in deep dark jewel-tones or black with a battered, worn, distressed appearance.

Dolly Kei outfits do not have to look cohesive. Clashing of patterns, colors, and accessories is encouraged.

Hairstyles tend to be natural and simple, with wavy hair and braids being common. Hair colors tend to be dark natural colors, including black, brown, and dark red.

While Dolly Kei is mainly based on visuals, there are some activities that are common amongst people that wear Dolly Kei.[1] 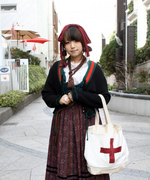