Diner is an aesthetic focused around the architectural design of vintage American diners, usually from the 1950s. This type of restaurant was cemented into American culture with the rise of travel during this time period. Having a place to rest and eat hearty food was a boon for many people who started road-tripping. Today, many travelers still go to diners, but they have gradually declined because of the fast food industry, chain restaurants, and a desire to eat new foods.

While the diner is a stop for travel, it also provides comfort to the locals and facilitates new encounters with kind strangers. Its owners and employees are typically the paragon of American home-y stereotypes: hard-working blue collar people who want to make a living and enjoy life in their independent restaurant. Diners also evoke comfort in Americans because of the comfort food they serve.

The diner is a significant place in fiction because of this. Media, especially centered around high school students or wanderers, typically uses diners as meeting places or encounters with new characters.

There are mainly 2 types of ways this aesthetic is utilized. One is the traditional, and the other is modern. The traditional version uses warmer colors and generally sticks closer to historical accuracy, with little to know use of over-the-top tropes and kitsch. The modern version is as it sounds--a modern take on the 1950s diners, transforming it with brighter colors, sometimes neon and Glowwave. Many modern businesses also try to capitalize on the novelty and clutter the restaurant with paraphernalia that reminds the diners of the 1950s.

The fashion generally sticks to general 1950s fashion, but usually with a focus on the waitress outfits of that time. Some diners also advertise that their waitresses use roller skates, a connection to the rise of the roller rink in the past. 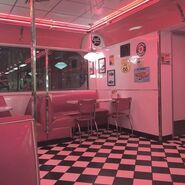 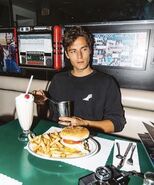 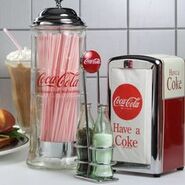 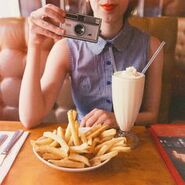 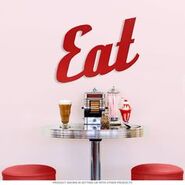 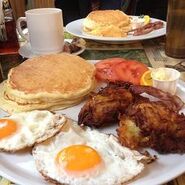