Kommunity FK’s “Something Inside Me Has Died” music video

Deathrock is a sub-genre of Goth that started in the 1980s. People who identify with the movement are called "Deathrockers". Considered a "missing link" between Goth and Punk, Deathrock is a fusion of the two movements.

As an aesthetic, like Horror Punk, it embraces a gothic, horror, and cryptid influenced aesthetic juxtaposed with a camp version of American 50s suburban and urban idealization. Typically, it was influenced by film, particularly silent movies (like The Phantom of the Opera), B-movies (like Planet 9 From Outer Space), zombies (especially George Romeo’s movies), and Rocky Horror Picture Show. They were also heavily inspired by macabre musical artists like Alice Cooper.

Deathrock was originally used as a term to refer to the American (specifically LA, California) 80s gothic scene. The movement was born out of Hardcore Punk and, much like British Goth, was a backlash against the stoic machismo of Punk.

The genre‘s development was best displayed by the legendary LA alternative music show New Wave Theater and in magazines like Maximum Rock N’ Roll. College radio was also integral to the scene’s growth.

To a smaller degree, New York had a Deathrock scene, which was fronted by bands like The Naked and The Dead and Of A Mesh.

The original Deathrock movement lasted very briefly, as the LA contingent quickly disintegrated under the weight of drug culture and key artists in the scene moving away from taking inspiration in kitschy B-horror film imagery to an increasingly disturbing infatuation with occult ritualism and murder.

Soon after, it became used as a broad reference to Punk-leaning Goth rock from around the world. In part this may have to do with the meeting of the 80s American and British Goth scenes, best illustrated in Patrica Morrison (who at that point all but abandoned the American scene) and Andrew Eldritch teaming up for The Sisters of Mercy’s Floodland.

During the mid-80s, the Goth scene around the world was be influenced by America’s Deathrock scene, particularly in France, Germany, Spain, and Japan.

True Deathrock music is known for having a more loud, punk-like sound incorporated with a more theatrical presentation (compared to post-Batcave Goth) and lyrics often referencing horror movies and other sci-fi themes.

Some of it even crosses into Rockabilly or Psychobilly, such as The Birthday Party, The Gun Club, and especially The Cramps. Horror Punk is also beloved by many in the scene (particularly The Misfits).

If you wish to get into Deathrock, some good beginning albums include:

Kitsch, 50s influenced horror is as beloved to them as it is to Horror Punks, but they also love a good non-fiction about the OG scene.

The fashion is very distinct, combining Punk’s DIY-fashion with Goth’s dark and spooky aesthetics. (Although much Trad Goth is extremely similar in this regard.)

In the 80s, the style was very broad, ranging from undead bride to army fatigues to Catholic iconography. By the 90s (thanks mostly to the band Cinema Strange) the modern variant of this style was born.

The most notable feature of Deathrock fashion is the “deathhawk”, a teased or backcombed variation of the mohawk hairstyle.

Another feature of the fashion is ripped clothes and fishnets. A prominent piece of ripped clothing is that of a webbed-sleeve, made usually out of ripped tights, to recreated a spider-web look on shirts, jackets, pants and even boots.

Deathrockers utilize dramatic makeup, and some may even wear a lot of facial piercings (although not always). 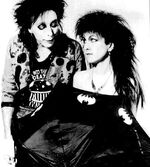 Nik Fiend and Ms. Fiend of Alien Sex Fiend during the 80s. 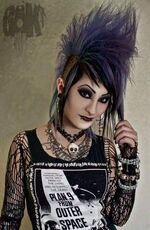 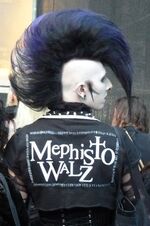