Trigger Warning: This aesthetic has themes of manipulation and childhood trauma. Viewer discretion is advised.

Dark Nymphet is a photo-based aesthetic that shows a picture of a pretty young girl, but unlike its counterpart Nymphet it has a darker and edgier tone. Dark nymphet focuses on nymphets who had bad experience in their life in various ways and choose to be gloomy unlike playful nymphets.

This aesthetic has been criticized for "romanticizing kidnapping" and other illegal activities. The Dark Nymphet aesthetic featured on Aesthetics Wiki does not condone participation in any illegal/unsafe activities depicted.

Dark nymphet aesthetic has the same origin as Nymphet aesthetic in Vladimir Nabokov's novel Lolita published in 1995. During Dolores and Humbert's journey, the girl slowly become sick of her life with the guy and became more mischievous and labile.

The visuals of Dark Nymphet are Grungier and have a darker color palette compared to other types of nymphets such as Nymphet and Key West Kitten, as there is a gray-ish blue washed out tinge combined mostly with black and white on many photos. On the other side adulh like look with red lips and black eyeliner are mostly present. The aesthetic is less polished than Nymphet, which are: messy hair and make-up, grainy photography and video, dirty locations are, small scars, gloominess, grudge. From Gothic lolita aesthetic, which may look very similar, Dark nymphet differs by its more simple outfits, less cuteness and more naturalism. 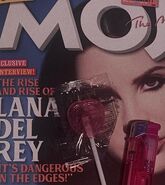 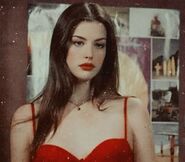 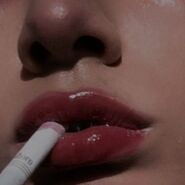 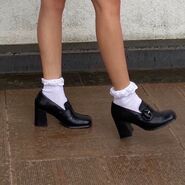 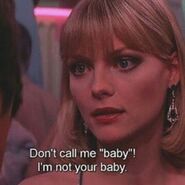