View source
watch 02:53
GTA: The Criminal Enterprises - The Loop
Do you like this video?
Play Sound

Dark Gatsby is a growing aesthetic diverging from the Roaring 20s and Flapper aesthetics that center around the vivacity of the 1920s Jazz Age. Dark Gatbsy owes its origins to the murkier underworld that helped the 1920s to roar (bootlegging, speakeasys, etc.), and is more visually diverse by including people of color, especially, African Americans --who created and popularized jazz-- and other underrepresented communities such as LGBTQIA. It also uses author F. Scott Fitzgerald's quintessential literary anti-hero Jay Gatsby from the American novel The Great Gatsby (1925) as the representative of this time. Jay Gatsby is a social climbing playboy of unknown origins who owes his wealth to shadowy gains.

The 1920s weren't seriously revisited in popular culture until the late-1960s to mid-1970s. The spectacle of the Jazz Age (early-1920s to 1930s) crumbled under the Stock Market Crash of 1929, colloquially known as Black Monday, where millions of people lost their life savings, businesses, and investment gains.

The political climate and social upheaval of the 1960s seemed to push the boundaries of post-World War II optimism and financial gains. With the growing turmoil, popular culture film, television, and fashion turned back to the optimism of the 1920s Jazz Age before the stock market crash. They yearned for forbidden music in hideaways, leniency toward traditionally social taboos, civil and social rights movements, experimentation with mind altering drugs, etc.

The stride piano playing and jazz era riffs even made it back into music, alongside the psychedelic rock of the 1960s, with composers like Paul Williams, Three Dog Night ("Just an Old Fashioned Love Song"), the Pointer Sisters, Dr. Buzzard's Original Savannah Band, Billy Preston, and others.

Unlike the first 1920s, the retro 1920s of the 60s and 70s introduced a wider array of trendsetters, including androgynous, transgender, and openly gay performers. American singer-songwriter Sylvester started gaining a following as a performer in the openly gay theater group The Cockettes, in San Francisco, CA. In Joshua Gamson's biography on Sylvester Fabulous Sylvester : The Legend, the Music, the 70s in San Francisco (Henry Holt & Co, 2005), he documents how Sylvester's performances were centered on 1920s and 30s Black chanteuses such as a Josephine Baker and Bessie Smith.

The 1920s lost favor with popular culture with the introduction of club music and the popularity of 1950s culture after George Lucas' film American Graffiti. The era didn't regain traction until the excesses of the second dot-com boom in the early-2000s, when popular culture was flush with new money, ridiculous financial consumption, and a celebration of vice and freedoms from social mores --again, a reflection of the 1920s pre-Black Monday.

During the early- to mid-2000s, films, literature, television, culture, and fashion began revisiting the 1920s in-depth and beyond the stereotypical Halloween costumes. With the reintroduction of more diverse stories and images, the visuals changed from fringed dresses, feathered headbands, cloche hats, and "Al Capone" striped suits, to more saturated jewel tones, deep browns, gold, and custom tailoring. Flashy gold jewelry and stickpins preferred by those who frequented illegal speakeasy, showed up in the Dark Gatby aesthetic where they hadn't existed previously.

Filmmaker Ken Burns created a documentary miniseries for PBS called Jazz and devoted a large segment of the series to the origins of jazz that flourished in the 1920s with such pioneers as Joe "King" Oliver, Bessie Smith, Jellyroll Morton, and others.

In 2000, Dr. Carlyle Van Thompson, an assistant professor in the department of literature, languages and philosophy at Brooklyn's Medgar Evers College, began lecturing on the theory that Fitzgerald's anti-hero was in fact an African American man passing as a white man. In his 2004 book, he delved deeper into his theory in the provocative book The Tragic Black Buck: Racial Masquerading in the American Literary Imagination (Peter Lang Publishing, 2004).

In New York, band leader and musician Michael Arenella created the Jazz Age Lawn party on Governors Island, which has amassed a cult following as an immersive 1920s event where guests dress in 1920s clothing and enjoy a day of performances, games, music, food, and vendors --all dedicated the 1920s.

The new vision of the 1920s was more realistic where people of color became central figures in previously diminished roles and the visual storytellers of a more robust jazz age.

In 2010, Terence Winter's crime drama Boardwalk Empire on HBO sealed the Dark Gatsby aesthetic for years to come. Based loosely on real gangsters of the 1920s era, Boardwalk Empire followed Atlantic City's provincial town treasurer and crime kingpin Enoch "Nucky" Thompson as he amasses wealth as a corrupt city official who engages in illegal deals with crime syndicates from Brooklyn and New York City, including Al Capone, Lucky Luciano, "Big Jim" Colosimo, and others. In this award-winning series, Nucky is also the go-between for local Black and white crime outfits. Created in 2013, Peaky Blinders became a United Kingdom version of Boardwalk Empire and adapted the Dark Gatsby aesthetic to its own homegrown, self-made criminal syndicate.

In 2020, Ma Rainey's Black Bottom based on August Wilson's play of the same name, and starring Viola Davis and Chadwick Boseman, infused the Dark Gatsby with

All of these touch points garnered a new appreciation for the ostentatious yet impeccably dressed looks that eschewed the clean cut, preppy 20s that had been thrust on the public.

Dark Gatsby is a deeper, more sexualized expression of the Roaring 20s in popular culture. The celebrants are not so enamored of the unending wealth portrayed in The Great Gatsby or the WASP-y films from that era. They're more interested in the darkness that sat just beneath the surface of the incredible social gains made during that time.

Even though African Americans created the jazz and expanded its popularity, the 1920s also saw deep segregation and racial terrorism in the form of lynchings that relegated African Americans to a racially segregated parallel world. Jazz and the vices that kept it going like illegal drugs (marijuana, cocaine, and heroine), illegal alcohol due to Prohibition, gambling, and prostitution, were all accessible in hidden speakeasys or at after-hour clubs. Jazz musicians were known to make their most money playing for brothels and parties run by crime syndicates. Piano player extraordinaire Fats Waller was Chicago gangster Al Capone's favorite musician for his parties.

LGBTQIA communities could also thrive in the jazz demimonde. Singer-songwriter Bessie Smith and Ma Rainey were openly bisexual and their songs dealt in double entendre that could be applied to women or men. Jazz performers Billy Tipton lived his life as male, while lesbian Gladys Bentley sang in menswear.

The Jazz Age was also a global phenomenon becoming incredibly popular in Europe and Asia, introducing new audiences to the jazz world, and sometimes, to their first experiences with Black Americans.

Dark Gatsby is a lush, rich, world of saturated jewel tones, golds, coffee browns, and rich velvet, leather, silks, and mirrored interiors. It's a world of after dark and before day break. It's almost vampiric in that the majority of the aesthetic surrounds deep darkness punctuated by gold or pink hued light or lightness juxtaposed against the shadows.

The interiors of Dark Gatsby are always brooding, but impeccably decorated. Interiors are gold hued lighted by lamps, or over-exposed daylight punctuated by a richly clad individual who is slightly more garish than the day calls for. Like the Art Deco style, all shapes are sharply angled, deliberate, and geometric. Suiting or clothing is free of buckling seams, ill-fit, or thinning material. Everything is impeccably precise, even in its casualness.

Make-up --regardless of gender-- is precise.

Dark Gatsby hair is always precise, well-groomed, and placed with the help of pomades, gels, or mousse. Traditionally, men keep the sides and back of the hair very close to the scalp. The remaining hair on top is either brushed back and held in place with product, or allowed to be "fop-ish" with a tumble of hydrated curls.

The purpose of Dark Gatsby is to show how your gains --ill or nought-- have afforded you the luxuries that may have been denied you previously. It's a personal rebuttal against the ostracizing and restrictions of access due to race, class, sexual orientation, or gender. Being well-appointed in your personal appearance shows that you weren't given access, but you took access and never asked permission. The statement pieces may be traditional (brooch, stick pin, earrings, suiting, etc.), but they're slightly gaudier than is standard and that's deliberate. 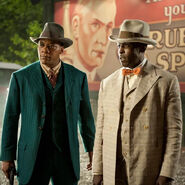 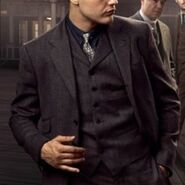 Couple during the Harlem Renaissance
Community content is available under CC-BY-SA unless otherwise noted.
Advertisement