Envisioning the future as incredibly bright and neon. Affiliated with dance and party culture.

Cyberpop is a fashion of primarily Japanese origin that first emerged during the 90s under the name "cyber". It's visually often very similar to Raver fashion, and sometimes also may take influences from Decora. The style features cyberfalls, neon colored hairstyles, and partially shaved hairstyles.

The key difference between cybergoth and cyberpop is the lack of black and grey in the latter. Cyberpop also contains more elements of atompunk in the usage of retro-future rings and shoulder puffs. The 1990s and early 2000's future fashion aesthetic found in Y2K is also influential. The color palette is similar to United States kandi kid raver aesthetics, but differs in that blue jean materials are never used. Both raver and cyberpop fashion makes use of neon colored UFO pants, both wide legged and draw string. It would be correct to say that cyberpop is a sub-type of raver fashion, as well as cybergoth fashion, though it also takes influences from harajuku styles such as decora.

Hairstyles usually dye the entire head in neon shades, rather than just adding stripes or partial color. Multiple colors are also used, and designs such as stars, hearts, space ships or animal prints may be dyed into shaved portions of the head. Dreadfalls were common from 2010-2016 but have declined in popularity out of respect for black communities. Wigs may be used in place of natural hair to create varied styles.

Headwear often makes use of goggles, neon plastic headbands and neon colored snap back hats with acrylic designs bolted directly onto the hat. And abundance of hairclips may also be used as seen in decora, or other more eclectic hair pieces may be pinned to the hair. As long as the colors are bright anything may be used, but especially things that follow a futuristic theme such as stars, planets, or spaceships.

Tops often have orbit type rings around the collar or on the sleeves to emulate a retro-future energy. This styling can also be seen on skirts, shorts, pants, shrugs or jackets. Neon faux fur is extremely common as trim on jackets and shrugs. Entire skirts may also use faux fur. Jump suits reminiscent of space suits are often seen, as are futuristic neon styled overalls featuring giant plastic buttons.

Shoes are often platformed, but high top skate sneakers in neon colors are not uncommon. Even canvas high tops may be used as long as the colors match the rest of the outfit. Gogo boots paired with fluffy leg warmers (as are common in raver fashion) are often seen here, though cyberpop adds it's own flair to fluffy legwarmers sometimes in the form of giant buttons.

Accessories are often made from neon laser cut acrylic into space-themed shapes or words. Alien space ships, rocket ships, stars and shooting stars are common motifs for necklace wear in cyberpop fashion. The brand Cyberdog is famous for it's shield necklace which is widely worn by all members of the cyberpop and cybergoth communities, featuring soft plastic in a 'V' line with holes along it's surface. 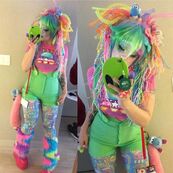 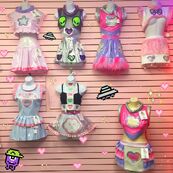 An example of masculine cyberpop