Art Academia
Avant-garde
Modernism
Suprematism
Cubism is an early 20th century avant-garde art movement that revolutionized European painting and sculpture, and inspired related movements in music, literature and architecture. Cubism has been considered the most influential art movement of the 20th century. The movement was pioneered by Pablo Picasso and Georges Braque, joined by Jean Metzinger, Albert Gleizes, Robert Delaunay, Henri Le Fauconnier, and Fernand Léger. One primary influence that led to Cubism was the representation of three-dimensional form in the late works of Paul Cézanne.

Cubism formed an important link between early 20th century art and architecture. The historical, theoretical, and socio-political relationships between avant-garde practices in painting, sculpture and architecture had early ramifications in France, Germany, the Netherlands and Czechoslovakia. Though there are many points of intersection between Cubism and architecture, only a few direct links between them can be drawn. Most often the connections are made by reference to shared formal characteristics: faceting of form, spatial ambiguity, transparency, and multiplicity.

While Cubism was primarily an art movement that focussed on visual arts, there were some authors who were influenced by Cubism. This influenced the use of an internal landscape (for characters), stream of consciousness, multiple perspectives, and fragmentation of the individual.[1]

Crystal Cubism is a distilled form of Cubism with a strong emphasis on flat surface activity and large overlapping geometric planes. The primacy of the underlying geometric structure, rooted in the abstract, controls practically all of the elements of the artwork.

Czech Cubism (referred to more generally as Cubo-Expressionism) was an avant-garde art movement of Czech proponents of Cubism.

Czech Cubists distinguish their work through the construction of sharp points, slicing planes, and crystalline shapes in their art works.These angles allowed the Czech Cubists to incorporate their own trademark in the avant-garde art group of Modernism.

They believed that objects carried their own inner energy which could only be released by splitting the horizontal and vertical surfaces that restrain the conservative design and “ignore the needs of the human soul.” It was a way to revolt from the typical art scene in the early 1900s in Europe.

Orphism or Orphic Cubism, a term coined by the French poet Guillaume Apollinaire in 1912, was an offshoot of Cubism that focused on pure abstraction and bright colors, influenced by Fauvism, the theoretical writings of Paul Signac, Charles Henry and the dye chemist Eugène Chevreul.

Tubism is a term coined by the art critic Louis Vauxcelles in 1911 to describe the style of French artist Fernand Léger. Meant as derision, the term was inspired by Léger's idiosyncratic version of Cubism, in which he emphasized cylindrical shapes.

Girl with a Mandolin (Picasso) 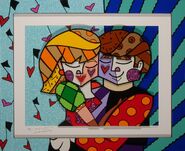