The Moominvalley franchise, Kiki's Delivery Service, My Neighbor Totoro, Winnie the Pooh, Beatrix Potter, Lord of the Rings, Anne With an E

Cottagecore (also known under the name Farmcore or Countrycore) is an aesthetic inspired by a romanticized interpretation of agricultural life. They are centered on the idea of a more simple life and harmony with nature. Certain themes associated are the survival of the environment, food and caring for people. While the aesthetic is predominant on a number of social media sites, Such as on Instagram and more recently Tiktok, the community notably prospers on Tumblr. It is very popular within the WLW community.

Cottagecore is often compared to aesthetics such as Grandmacore, which seek to invoke a similar sense of nostalgia. It is also similar to Naturecore, Honeycore and Warmcore.

Pettson and Findus is a series of children's books by the Swedish author Sven Nordqvist. It has been translated in various European languages and some films and books were made, but it never became very well known in America. Though created before the 2010s, its art and stories embody many Cottagecore traits, such as a simple life in nature, and the fact it's about Pettson (a retired farmer) and his talking cat living somewhere in the Swedish countryside, in their cottage, surrounded by beautiful landscapes and animals. 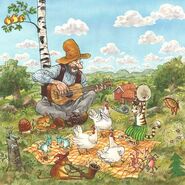 Add a photo to this gallery
The Faerie Handbook: An Enchanting Compendium of Literature, Lore, Art, Recipes, and Projects,written by editors of Faerie magazine is also a comprehensive guide of fashion, fairy lore, Garden pressing instruction, photography, baking, herbs and their different meaning. Art,literature and making fairy cottages.

<to be added by anyone! go wild>

flowery-
Add a photo to this gallery
Retrieved from "https://aesthetics.fandom.com/wiki/Cottagecore?oldid=9693"
Community content is available under CC-BY-SA unless otherwise noted.