Concore is an aesthetic associated with thieves, conmen, grifters, lifters, and scammers. The prefix comes from the word con, which is short for “confidence trick.” The core element of a con is convincing people that someone or something is other what it is in reality and is usually done for monetary gain. Concore aesthetics frequently appear in espionage, crime, and detective media.

Concore experienced revival beginning in the 2010s, with social media influencers using photography tricks and editing software like Photoshop to appear thinner and healthier in an effort to earn commission on untested products.

The aesthetic of those who create and carry out elaborate plans to steal art, money, and jewels.

Theft of the "wrong" things

Some critics believe that the skills of hackers and thieves should be utilized to benefit a social majority, such as erasing student loan debt or medical debt.

Thieves sometimes justify their actions as a way of getting back at a high powered politician or member of the wealthy elite. Many members of the general public feel that justice should be carried out in the court of law, as the fear and violence instigated by the conmen can outweigh the crime they are accused of committing.

A good con artist is capable of blending in, fitting in or standing out, as the occasion demands. Clothing is appropriate to the class, culture and ethnic background of the persona the con artist is portraying and often relies on stereotypes. A female con artist can sometimes take on a Femme Fatale persona.

Con artists generally engage in illegal activity, but they have many skills which can be useful or fun for ordinary people.

There are also some activities that feel like cons because society has conditioned us to behave in certain ways. 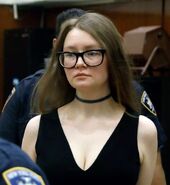 Helene Beltracchi, posing as her grandmother with paintings by her husband, Wolfgang.