Warning: Although the aesthetic itself isn't offensive by nature, there IS a rather dark tale involving grisly murder so if that sort of thing bothers you, please skip over the bulk of the "Initial Downfall" section until after the link in it; it should be fine after that.

Really, the vast majority of the aesthetics on this wiki could trace their lineage back to the Club Kids

Party Monster
Club Kids were a group of young New York City dance club personalities led by Michael Alig and James St. James in the late 1980s and early 1990s. Several Club Kids have made long-lasting contributions to mainstream art and fashion, even in the present day. In many ways, the vast majority of the aesthetics on the Aesthetics Wiki owe their very existence to the Club Kids of the 1980s. A movie about the Club Kids was made through World of Wonder Productions (the same production company behind the world-famous RuPaul's Drag Race) called Party Monster starring Seth Green as James St. James and Macaulay Culkin as Michael Alig based on the novel James St. James wrote entitled Disco Bloodbath (which was renamed to Party Monster after the success of the movie).

While it fell dormant for a while after Rudy Giuliani started cracking down on the rampant drug use in New York City some time in the mid-1990's thanks to his "Quality of Life" crackdowns, the Club Kid aesthetic has started to see a resurgence with a brand new generation, although the Nu-Club Kids definitely seem to have a more introverted nature to them compared to the rowdy and raucous Club Kids of old.

The early, early origins of the Club Kids movement date back to 1984, when Saginaw, Michigan native James Clark (who would later become James St. James) moved to New York City to study performance art at New York University after being inspired by the novel Popism: The Warhol Sixties by the late, great Andy Warhol in hopes of becoming the next Warhol Superstar. Instead, he got absorbed into the New York club scene after becoming good friends with columnist and nightlife icon Michael Musto, which allowed James to live something of a celebutante lifestyle. Meanwhile, Michael Alig moved to the city from his hometown of South Bend, Indiana and began to hone his promotional skills by promoting small events in the Big Apple

In the late 1980's is when things come to fruition. Despite initially being rejected by the others at first, Michael Alig was undeterred and started up his own scene with his own unique cast of characters. His promotional skills and flamboyant personality did eventually win James St. James over and the Club Kids were officially born. In 1987, Michael Alig officially supplanted the late Andy Warhol as the premier partier of New York City (due to his recent passing).

On March 17th, 1996, Michael Alig and fellow Club Kid Freeze (real name Robert Riggs) killed their drug dealer Angel (real name Andre Melendez) by Freeze hitting him in the head with a hammer three times, followed by Alig smothering the drug dealer and pouring Draino into his mouth before duct taping it shut. After 5-7 days, they went and bought 2 chef knives and a cleaver at a Macy's before getting to work dismembering the corpse, sticking the remains into garbage bags and duffel bags before dumping said remains into the Hudson River, where it was ultimately discovered. Unfortunately for them, they did get caught and arrested where, on October 1st, 1997, Freeze and Michael Alig were sentenced to 10-20 years in prison for manslaughter. Freeze was let out on parole in 2010 while Alig remained in prison until May 5th, 2014 and has since gotten involved in the YouTube space. Despite the abrupt ending to the Club Kids scene, it continued to bubble under the surface of Drag Culture until the mainstream explosion of popularity in drag culture thanks to RuPaul's Drag Race (hosted by RuPaul, himself a former Club Kid) and now has seen something of a renaissance in the LGBTQ culture of the modern era, although now the Club Kid aesthetic is no longer restricted to the clubs and seems to have found a new home on Instagram (which you can find a collection of under #clubkid), where the new, more introverted Club Kids are able to express themselves in a more intimate setting and with a bigger audience.

If one wishes to learn more about this particular subject, it's highly recommended to read James St. James' book "Party Monster" (originally titled Disco Bloodbath) or watch the World of Wonder film of the same name starring Seth Green as James St. James and Macaulay Culkin as Michael Alig.

Alig died of a drug overdose on Christmas of 2020.

All Club Kid fashion is, incredibly, Avant-garde and Androgynous by design, looking to push the boundaries of fashion and art, having a very Punk/DIY vibe to them since these over-the-top designs were often hand-made by the Club Kids themselves

A lot of Club Kid music was heavily inspired by the Studio 54-era Disco music and the burgeoning electronic music sound that was just starting to penetrate into mainstream musical culture during the rise of the Club Kids. Many notable musicians within the Club Kid ranks include: 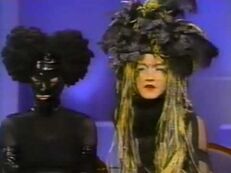 Welcome to my face! I'm James St. James and THIS is Transformations!
Community content is available under CC-BY-SA unless otherwise noted.
Advertisement