Classic Lolita is a substyle of Lolita fashion that is very inspired by historic fashion and is characterized by Victorian elegance and class.

The silhouette of Classic Lolita (more often than other styles), features an A-line skirt, with skirts usually being longer than what you would expect to see in other Lolita coordinates. Tea length skirts (skirts that come to the mid calf) are extremely common, with underskirts (a slip-like skirt with a lace ruffle at the very bottom) can be used to make a knee-length dress go to tea length.

Coordinates often include heirloom details such as pintrucks and ruffles.

Unlike other Lolita styles, flat shoes are very uncommon. In Classic Lolita, higher heeled shoes with straps as well as Victorian style boots are favored instead. The hair in Classic Lolita is kept natural in various shades of blonde, brown, and black. The hair can be styled in any way the person prefers. There are some who curl their hair, but it isn't very extreme. Makeup is preferred to be kept natural-looking as to appear mature. 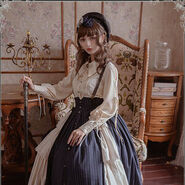