Baddie
Bubblegum Bitch
Femme Fatale
Red
Cherry Emoji Twitter (CET) is defined – perhaps above all else – by its aesthetic. This is the femme fatale archetype for the modern age, warped by late capitalist materialism and the pressures of social media. But rather than drawing inspiration from 40s film noir, it looks to the kitsch McBling of the early 00s: think murder plots and Juicy Couture; coital choking and Lancôme lip gloss; daddy issues and Bratz dolls. It is Megan Fox in Jennifer’s Body wearing low rise jeans and eating the flesh of men; Natalie Portman stripping in Closer in an electric pink wig; Sarah Michelle Gellar in Cruel Intentions snorting cocaine in a Catholic schoolgirl uniform. They listen to Lana Del Rey, female rappers; watch Fight Club, Pulp Fiction, Lolita and Jennifer's Body. Essentially, it is about being very bad, but looking very good while you do it.

This wasn’t how it always was. If you scratch away at the glittery veneer, you’ll realize there’s a lot more to Cherry Emoji Twitter than lusty teenagers and 00s nostalgia. In fact, the community – which is now populated by white girls and defined by white celebrities – was originally founded by a group of young black women.

“Before it was called Cherry Emoji Twitter, it was called Hoe Twitter,” explains Samiyah, 22. “It was a community of individuals (mostly black women) who tweeted about their lives, fashion, celebrity gossip, and dick appointments. A lot of us had a very good way of turning our lives into funny memes that a lot could relate to, as if we were speaking our minds for other people.”

Samiyah, otherwise known as Anal Girl, tweets at @94GRACES (she used to be @benadryl and @SAM1YAH before both accounts were shut down). She considers herself one of the original members of Hoe Twitter, alongside fellow users @JE55ICAFANT, @YUNGSADISTIC and the late Nicole Milfie. When they first began posting back in 2014, their tweets were mainly about sexual empowerment and acceptance. They would still share McBling visuals and shots of 00s celebrities, but the true purpose was about much more than aesthetics. “My Twitter is like.... the hoe haven,” Milfie once tweeted. “Hoes can come to my Twitter and be safe. And interact.”

It was after Milfie tragically passed away in 2016 that Hoe Twitter made the transition to Cherry Emoji Twitter. Milfie – real name Taylor Crenshaw – was widely considered to be the co-founder of Hoe Twitter, and often used the cherry emoji as a personal stamp. She put it in her display name, slipped it into captions, and would even post selfies with actual IRL cherries. After her death, the emoji began flooding Hoe Twitter in tribute, redefining its aesthetic and marking the start of a new era for the community. As a result, Hoe Twitter soon became known as Cherry Emoji Twitter.[1] 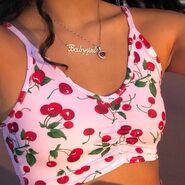 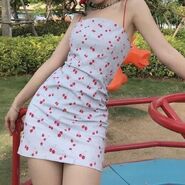 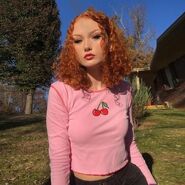 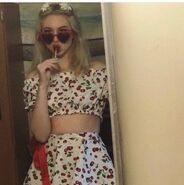 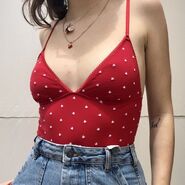 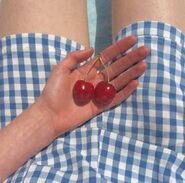 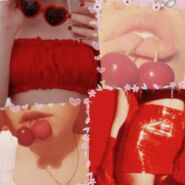 Add a photo to this gallery
Retrieved from "https://aesthetics.fandom.com/wiki/Cherry_Emoji_Twitter?oldid=43830"
Community content is available under CC-BY-SA unless otherwise noted.