The tree of life

Celtic is language, traditions, and culture from a collection of Indo-European peoples in parts of Europe and Anatolia identified by their use of the Celtic languages and other cultural similarities. Modern Celtic places include the countries of Ireland, Scotland, and Wales, as well as Brittany, Cornwall, and the Isle of Man.

Historic Celtic groups included the Gauls, Celtiberians, Gallaecians, Galatians, Britons, Gaels, and their offshoots. The relationship between ethnicity, language and culture in the Celtic world is unclear and controversial. In particular, there is dispute over the ways in which the Iron Age inhabitants of Britain and Ireland should be regarded as Celts.

The earliest undisputed examples of Celtic language are the Lepontic inscriptions from the 6th century BC. Continental Celtic languages are attested almost exclusively through inscriptions and place-names. Insular Celtic languages are attested from the 4th century AD in Ogham inscriptions, although they were clearly being spoken much earlier. Celtic literary tradition begins with Old Irish texts around the 8th century AD. Elements of Celtic mythology are recorded in early Irish and early Welsh literature. Most written evidence of the early Celts comes from Greco-Roman writers, who often grouped the Celts as barbarian tribes. They followed an ancient Celtic religion overseen by druids.

Insular Celtic culture diversified into that of the Gaels (Irish, Scots and Manx) and the Celtic Britons (Welsh, Cornish, and Bretons) of the medieval and modern periods. A modern Celtic identity was constructed as part of the Romanticist Celtic Revival in Britain, Ireland, and other European territories such as Galicia. Today, Irish, Scottish Gaelic, Welsh, and Breton are still spoken in parts of their former territories The six territories widely considered Celtic nations are Brittany, Cornwall, Wales, Scotland, Ireland, and the Isle of Man.

Celtic paganism is a polytheistic religion, meaning they worship multiple deities. They celebrate the cross-quarter festivals (aka the major holidays) and the solstices and equinoxes (aka the minor holidays). The Celtic new year is November 1st, a day after Samhain (also known as Halloween), when the veil between the spirit world and the human world was supposedly lifted.

The Catholic Church has influenced politics and culture in Ireland since the medieval period. St. Patrick and St. Brigid, both patron saints of Ireland, lived during this time period. The Book of Kells, which influenced Celtic art and design during the Celtic Revival period, was created by monks during this time.

The 19th and 20th centuries were a period of struggle between the English Protestant ruling class and the Irish Catholic working class. Uprisings and rebellions were common during this time period. While the country is more secular today, the influence of the church and Catholic schools is still visible, and tropes and imagery influenced by Catholicism pop up in Irish media often.

The Presbyterian church had significant influence in Scotland and Scottish culture.

The flag of Wales, which features a dragon 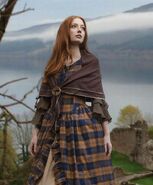 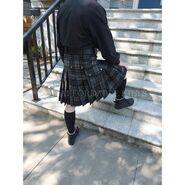 A Tartan Kilt, a common clothing item in Scottish fashion