Cassette Futurism is a genre of retrofuturism based on the 70's and 80's. The media itself does not have to be set in this time period, but rather explore the speculated alternate future of it. As the name suggests, Cassetes are the main way of storing and transferring data.

CRT monitors are often used, occasionally evolved into larger more complicated machines, still with curved screens and chunky beige cases. These machines also often have large panels with lots of blinking lights and buttons and any graphics will be poor. Use of geometric shapes is common, and greebling is used mostly on places like lab walls or spaceships.

Scenes may be monochromatic due to the overuse of grey/beige colours, sometimes with the glow of an led light, usually in red, green, or blue. If there is multiple colours, they are often anologous. 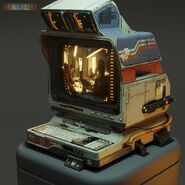