Britpop was a mid-1990s UK-based music and culture movement that emphasized the importance of British culture. It produced brighter, catchier alternative rock, partly in reaction to the popularity of the darker lyrical themes of the US-led grunge music and to the UK's own shoegazing music scene. Bands at the forefront of this scene were Blur, Oasis, Pulp, Elastica, Suede and the Verve.

The movement is believed to have begun with the release of the single "Popscene" by Blur in 1992. This was followed by the release of their second studio album "Modern Life Is Rubbish" in 1993, which was conceived by Blur's frontman Damon Albarn as a reaction to the growing Americanization of British culture. Another important band were Oasis, who achieved huge success in both the U.K. and the U.S.A. with their second studio album "(What's the Story) Morning Glory?".

However, there has been a resurgence of Britpop in recent years. The reason given for Britpop making a comeback is that people are looking back and feeling nostalgia for Britpop, so the genre is receiving attention again.[1] 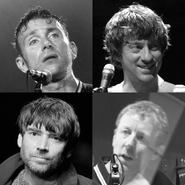