Improve our creativity and imagination, enjoy these types of things and respect others ideas

Surrealism
Weirdcore
Bizarro Fiction is a contemporary literary genre, which often uses elements of absurdism, satire, and the grotesque, along with pop-surrealism and genre staples, in order to create subversive, weird, and entertaining works.

Bizarro literature can trace its roots at least as far back as the foundation of Eraserhead Press in 1999, but the description of the literature as "Bizarro" is a more recent development. Previous terms used to refer to the burgeoning scene include "irreal" and "new absurdism", but neither of these was used broadly. On 19 June 2005, Kevin Dole II released "What The Fuck is This All About", a sort of manifesto for the then unnamed genre. While the essay does not feature the word "Bizarro," subsequent discussion about the essay led to the name as well as the inauguration of the Mondo Bizarro Forum.

In his essay, "The Nab Gets Posthumously Bizarroized", Tom Bradley traces the genre's roots back in literary history to the time of Vladimir Nabokov's "gogolization," and his cry of despair and horror at having his central nervous system colonized: "...after reading Gogol, one's eyes become gogolized. One is apt to see bits of his world in the most unexpected places." Bradley claims the Bizarro movement is continuing and fulfilling that gogolization process, under the name "Bizarroization": "...we have been completing the preposterous project which [Nabokov] took over from Gogol nearly a hundred years ago.." Bradley further asserts that Bizarro writers can trace their spiritual roots back to the letters which Ovid wrote while exiled on the Black Sea.

This literary genre uses every color you can think of. It doesn't have an exact pattern, texture or effect, but it mix all the things that you could imagine. Like an apocalypse with monsters made of food.

You can use clothes, clothes with weird stuffs (images, prints, extra parts), you can also dress like any character you want. Make up: you can make and create make up like you would as a monster , etc. However any of these things are necessary. You can wear and dress however you want, because this is most a literary genre. 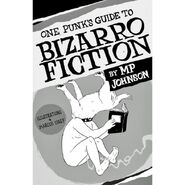