Bioteam is a music group originating in early 2020 with biopunk influences. The sound of Bioteam is very electronic, with trap hi-hats pushed to the extremes and synth melodies that sound like Aphex Twin mixed with R2R Keygen Music mixed with orchestral arrangements.

Grinders are people who apply the hacker ethic to improve their own bodies with do it yourself cybernetic devices or introducing Biochemicals into the body to enhance or change their bodies' functionality. Many grinders identify with the biopunk movement, open-source transhumanism, and techno-progressivism. 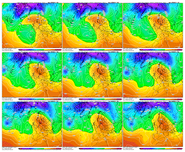