Bimbo Casual (also called Bold Casual) is an aesthetic that embraces sexuality and self-confidence. The aesthetic was originally created specifically for lesbian bimbos,[1] but anyone of any sexual orientation can participate in the aesthetic. Bold Casual is a blending of femininity with androgynous and masculine accents, and the acceptance of sex appeal.

The "bimbo" aesthetic, an umbrella term to describe outfits that help girls feel comfortable in their own skin while feeling sexy, has many roots in the early 2000s. However, this version of the aesthetic specifically was invented by TikTok creator @nat.thewitch, real name Natalie Gonzalez, as part of her viral "Hot Girl Journey" series, a series of videos centered around finding confidence and self-love to feel beautiful and "hot" in one's own skin. It was originally meant to be a less feminine bimbo style for lesbian bimbos, but has grown into its own fashion style and its own aesthetic other than normal bimbo.

Euphoria actress and model Barbie Ferreria is frequently featured in the Pinterest board that marks the creation of the aesthetic. The original TikTok creator of the aesthetic herself could also be considered an exemplar of the aesthetic. In other words, images of confident, or bimbo-like, women could be used for visuals of this aesthetic. 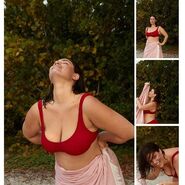 The combination of a rustic plaid pattern and a more sensual bold crop top fits the aesthetic, along with the models 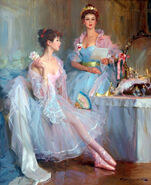 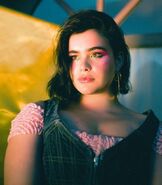 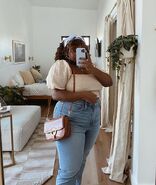