Art Academia
Romanticism
Romantic Academia
Vintage
Art Nouveau is an international style of art, architecture and applied art, especially the decorative arts. It was most popular between 1890 and 1910.

It was a reaction to the academic art, eclecticism and historicism of 19th century architecture and decoration that favoured fine art, such as paintings and sculptures, over applied art. It was inspired by natural forms and structures, particularly the curved lines of plants and flowers, and whiplash forms. Other defining characteristics of Art Nouveau were a sense of dynamism and movement, often given by asymmetry and by curving lines, and the use of modern materials, such as iron pillars, sculpted and curved in naturalistic designs. Art Nouveau was known under the names of Jugdenstil in Germany, Nieuwe Kunst in the Netherlands, and Modern Style in Great Britain. It also inspired the psychedelic art of the 1960s. 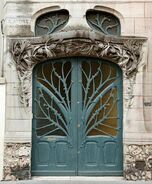 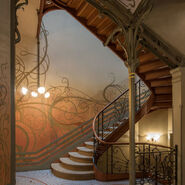