Angelcore is a contemporary aesthetic inspired by imagery and depictions of angels, and is adjacent to devilcore.

The aesthetic is designed to emulate the same unearthly beauty that the European stereotype of angels are described and depicted with, though it can also include non-European angel aesthetics. This can be done with modern or older presentation methods.

It’s also important to note that much angel mythology/imagery comes from multiple belief systems (from Greek paganism, to Judaism, to New Age, to the aforementioned Christianity). So there are no specific religious connections or connotations involved in an angelic aesthetic.

As an aesthetic based heavily on feeling, ambient-based and adjacent music genres can be seen as complementary to this aesthetic. Folk and classic piano are also popular.

The difference between cherubs and angels are enough to warrant its own tag on various social media websites most notably Tumblr. Cherubcore focuses on the feelings and values portrayed by heavenly cherubs and the small, sweet, baby-like innocence of the figures that differ from the divine essence of angels. There is often a distinct crossover in this aesthetic with Angelcore and Babycore, with a hint of Lovecore now and then due to the similarity between cherubs and the mythical figure Cupid. The visuals of cherubcore are the same as angelcore but add more fun visuals like candy, cherubs laughing in paintings, hearts, porcelain figures, and child's toys. There are lots of pinks and whites involved as well. Fashion has a very similar overlap to Nymphet and Babycore, with youthful and childlike articles of clothing and accessories.

The Fallen Angel aesthetic, also known as dark/goth angelcore, takes angelcore and adds more somber themes and dark visual tones while still providing the essences of ethereal and other-worldy. Many of the themes of fallen angel involve feelings of "falling from grace" or unworthiness/not wanting to be placed on a pedestal like angels are commonly portrayed. The aesthetic itself can both exude feelings of peace and radiance or sorrow and malice depending on the camp presented.

Common motifs for fallen angels include angel statues, black wings, flowing white and/or black fabrics, fire, halos, horns and tails, the sky and the ground, snakes, and much more. Visually, there is a crossover with Dark Naturalism, which exhibits dark, misty visuals of nature. Other visuals can overlap with Traumacore and Grunge, employing angelic motifs mixed with heavy melancholy themes. Fashion takes regular angelcore and turns it black, almost gothic. It can also take an aforementioned Grunge route.

This aesthetic can focus on criticizing the Catholic religion, sharing similar aspects of reasoning with Sacricore. Common topics include excommunication, religious trauma, and mental illness. Often this is mixed with the aforementioned feelings of falling from grace or feeling tainted, and potentially being cast out of a religion or choosing to leave it.

Biblical Angels are taken from the biblical depiction of angels, rather than the altered humanistic version created by the media. There are various sections of the Bible where angels and cherubs are described, including Ezekiel 1:5-11, Isaiah 6:2, Job 38:7, Ps 8:5, Ac 26:13, and Re 1:20. These verses and many others describe angels as hot, pure energy, and frightening to humans. This is a popular subject in art and can be seen across media. Often times they are depicted as half human, half animal or as energy balls with a thousand eyes circling around it with six wings.

This subject focuses on the reality of divinity and the terrifying truth that had been covered up by mainstream society over history. The overall theme of the biblical angel aesthetic is questionsing monstrosity and fear, and presenting truth to those living in ignorance. It is both ethereal and horrifying, and has a subcommunity for those who identify with these depictions. These communities also use their art of biblical angels to portray the previously mention themes, as well as humor. Being ethereal and mysterious, feeling "too big your body", and a deep philosophical nature can accompany the moods of this aestheic.

A list of external links to help get a better understanding of this aesthetic. 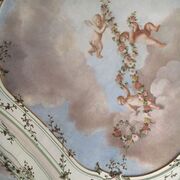 An angel by julius bates
Community content is available under CC-BY-SA unless otherwise noted.
Advertisement