View source
watch 01:54
Arcane: League of Legends - The Loop
Do you like this video?
Play Sound

"We wanted to reflect that diversity with our costume decisions. We aimed for this fusion of 19th-century silhouettes with African culture....." He refers to the look as “Afro-Victorian,” adding: “In the world of fantastical, the story worked on such a completing human level that we really wanted to reach out to audiences and offer them something very appealing and modern.”- Michael Wilkinson, Women's Wear Daily, November 13, 2020[1]

The term Afro-Victorian was coined by costume designer Michael Wilkinson, when designing the aesthetic for Netflix holiday musical "Jingle Jangle".

"My concept was to create eye-catching Victorian-era silhouettes accented by fabrics from African cultures and countries. It was a constant balancing act to juxtapose the old and the new – even though our story is set in the 19th century, the music and the choreography is very modern, and we wanted to make sure the costumes appealed to contemporary audiences. Again, color was important here – David reminded me that history wasn’t in black and white and sepia – it was in COLOR!" - Michael Wilkinson, Awards Daily, February 18, 2021

Even though the term was first introduced to the public by Wilkinson in 2020, the style could be found in the works of artist Yinka Shonibare, the photos of photographer Tamary Kudita and in the style of the Herero women of Namibia.

Yinka Shonibare CBE RA was born in 1962 in London, UK. He studied Fine Art at Byam School of Art, London (now Central Saint Martins College) in 1989 and received his MFA from Goldsmiths, University of London in 1991.

Shonibare’s interdisciplinary practice uses citations of Western art history and literature to question the validity of contemporary cultural and national identities within the context of globalization. His trademark material is the brightly colored Dutch wax batik fabric he buys in London. This fabric was inspired by Indonesian design, mass-produced by the Dutch and eventually sold to the colonies in West Africa. In the 1960s, the material became a new symbol of African identity and independence.[2]

A product of dual heritage, Tamary Kudita was born in Zimbabwe while her ancestry can be traced back to the Orange Free State, the Boer republic in Southern Africa. She received a BA in Fine Art at Michaelis School of Fine Art at the University of Cape Town and quickly established herself as a fine art photographer with exhibitions in Zimbabwe and abroad.

Kudita's investigations into the legacy and impact of colonialism on the family structure has resulted in exhibitions delving into the history of the Post-colonial identity, race, and representation. [3]

Their style of dressing was influenced by the wives of German missionaries and colonialists who first came to the country in the early 1900s.

The long dresses are heavy and reflect the style of the Victorian period with numerous petticoats worn to add fullness to their skirts. They are hand-sewn by the women who add their own personal style and flair.

According to Tim Henshall, a British tour operator who has visited the region for nearly two decades and gotten to know some of the women, the headdress is “built to represent the horns of the cattle, which are so important to the Himba and Herero communities.”

“The Germans in Namibia brought people in to work for them so they took the local communities and gave them work in their houses and on their land,” said Henshall, who runs Kamili Safaris.

“Instead of the Herero being topless and barely covered, which would offend the modest attitudes of Victorians at the time, they wanted them to be covered up,” he added. Henshall added that the women showed no sign of being bothered by wearing the outfits, even in Namibia’s tropical climate.

The Herero women take enormous pride in their outfits and have also developed a sideline in making and selling dolls wearing exact replicas of the dresses to tourists.[4] 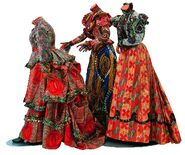 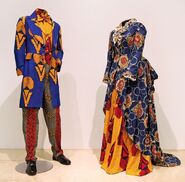 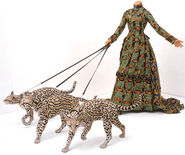