70s Disco is an aesthetic related to the disco trend originating in the 1970s. It is associated with disco music, as well as the fashion of disco clubs during the period.

The fashions ranged from a sleek, satin-coated bohemia to nigh-Glam Rock quasi-futuristic ensembles. It was a semi-androgynous fashion movement (much as Glam Rock was), but in contrast to the almost entirely white artists of Britain, most of the important artists in Disco were black soul and funk artists.

These Disco artists went on to influence many white British artists in the late 70s and early 80s (including David Bowie). This later lead to the creation of sophistipop, a hybrid of blue-eyed soul and synthpop seen in the New Romantic movement. It even influenced City Pop, which in turn lead to the modern music of Future Funk.

It’s also the source of Electric Boogaloo, a dance style that would lead to the future development of B-Boys/Breakdancers. 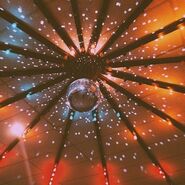 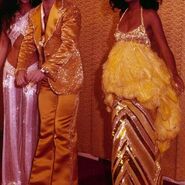