Leave It to Beaver

Pyrex, Tupperware
1950s Suburbia describes the culture of the American middle class in the 1950s.

Due to a population boom following World War Two, new neighborhoods were built in the areas surrounding large cities. These communities were known as suburbs, thus the term suburbia. The most famous example is Levittown, in New York state, which was the prototype for mass produced, mass-scale housing.

The government led push for a return to normalcy (i.e., traditional gender roles) following World War Two, created an idealized image of the American family and the United States itself. The ideal suburban neighborhood was a friendly community, where everyone looked and thought exactly the same way, and everyone was happy. This image was reflected in advertising, books, and television shows.

1950s Suburbia imagery was used in the horror genre as early as 1959 (in The Twilight Zone) to indicate the uncanny or surreal. Today, the intensely gendered and socially regimented lives of the middle class of the time are a source of fear to an audience that lives in a post-second wave feminist world. See Suburban Gothic for more details.

Following World War Two, returning soldiers used the G.I. Bill to gain a college education and many entered the white collar job market, pushing out the women who had had those jobs during the war.

Many women chose to marry and settle into new roles as mothers and housewives, but the Baby Boom forced the need for affordable housing - and fast. This led to the development of planned suburban neighborhoods like Levittown.

Much of the imagery related to this aesthetic features the nuclear family, a new concept of a couple and their children living independently from their parents, which hadn't been possible in the 1930s and 1940s. The average family at the time consisted of a mother, father, and 2.5 children. (This is a statistical number of course, but the image of the family was generally depicted as having a boy, a girl, and a baby of unspecified gender.)

Popular culture pushed this image as normal, and even patriotic. However, the families most often portrayed in popular culture were white, reflecting only a portion of the American population. It was true that Black families were far less likely to benefit from the G.I. Bill and housing loans which made this lifestyle possible, but it does not mean that successful middle class people of color did not exist at the time.

In reality, even white families struggled to obtain and later maintain this image of constant happiness, success, and tidy perfection that was promised to them by advertisers and pushed on them by the government through Social Guidance films. Adults turned to drugs and alcohol to cope, and the backlash against the status quo that was building in their children led to the countercultural movements of the 1960s and 1970s, including but not limited to the feminist movement, the gay rights movement, and the Civil Rights movement. In summary, Western civilization in the 1950s was like a Mentos-filled coke bottle, waiting to pop. Even though families smiled and acted like everything was perfect, underneath the thin layer of prosperity was a cesspool of bigotry, mental health issues, and internalized rage and depression. That's why the 1950s is fascinating for so many people, and the subject of many paranormal or horror films, TV shows, or other works of media-- underneath those smiling faces and happy families were deep wounds that were never healed.

Tradwife is a combination of the words traditional and wife. The aesthetic is anti-feminist, preferring women play their "traditional roles" of wives and mothers. The movement glorifies domestic tasks like cooking, baking, cleaning, and laundry. A major part of the aesthetic is pleasing the husband.

While it always glorifies an idealized picture of the 1950s, some supporters (especially men) also glorify domestic violence under the guise of "keeping the wife in line."

Much of the imagery is woman centric, since men were assumed to be at work during the week.

Many stores that offer vintage clothing include rockabilly and greaser styles in their 1950s collections but those styles should be avoided as their are from different aesthetics which are more sexual. 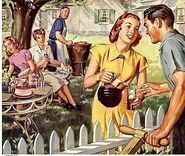 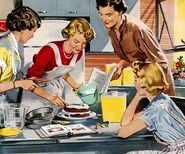 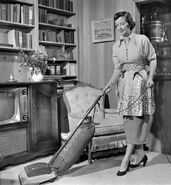 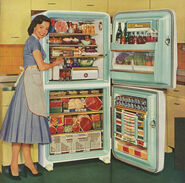 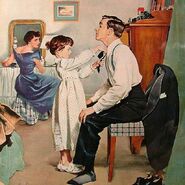 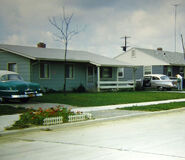