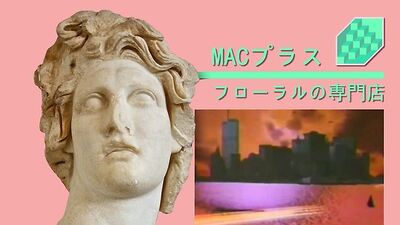 Vaporwave is a music genre branching from electronic Chillwave. But the unique and iconic visual aesthetic cultivated alongside it is now, debatably, more popular and recognizable than the music itself. Vaporwave, as an aesthetic and movement, has been described as a tongue-in-cheek commentary... 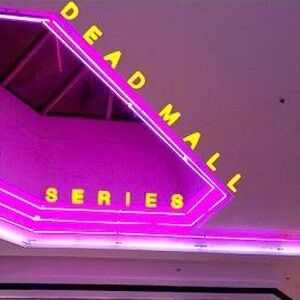 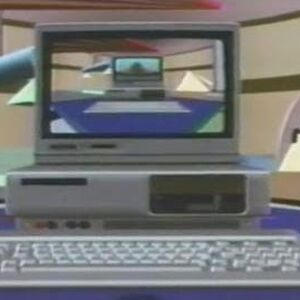 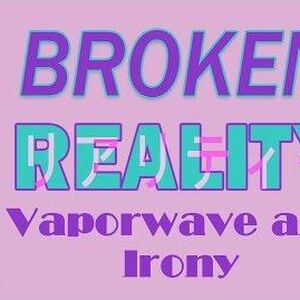 So basically idk what my aesthetic is so I like the coquette, fairycore, and vaporwave I wear hoodies and shorts so I need help finding my aesthetic

That's all I gotta say.

Here's a cool Vaporwave GIF for a background:

Edit: I ended up naming him Hotline, and I'll figure out his outfit on my own lol

So I've been tinkering around making a uquiz to find your aesthetic (nothing perfect, just for a little fun), and I've been looking to add more.

I was wondering if anyone had any suggestions as to which others I should add? I'm planning on adding Weirdcore and possibly Neon Academia too.

It's too hard for me to find one. For example when i ask my friend(online female) they say im a tomboy because i hang out with boys. it's really hard tbh. I like indie, but I dont like too bright colours. Pastel is a yes-no situation for me. Dull colours?.... Yeahhhh i love it.Weirdcore is cute but I get scared off by some of the images. Traumacore? Im quite unsure. Can someone help me? I'll list what i like..

Andd thats all. Please help me to know what my aesthetic is ;-; 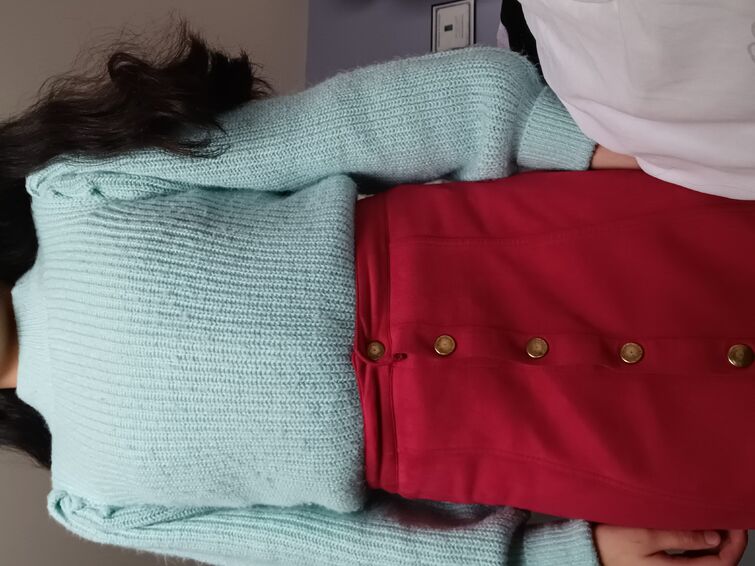 Here is my aesthetic. Is there any that match this?

Flags of any kind 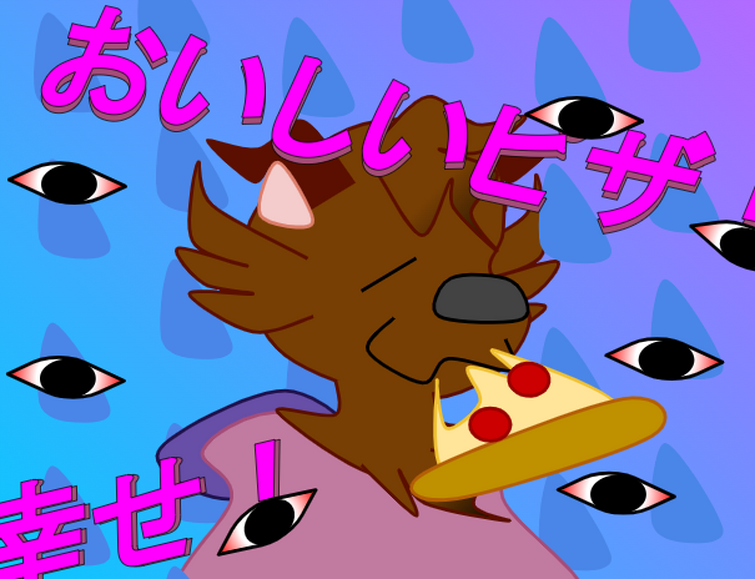 What Is My Aesthetic?

Also, how can I make a mood board of it?

So basically this abomination of an aesthetic is basically, vaporwave, cherry emoji twitter, scene, glitchcore, webcore, weirdcore, animecore, and dreamcore, I don't know what to name this aesthetic... 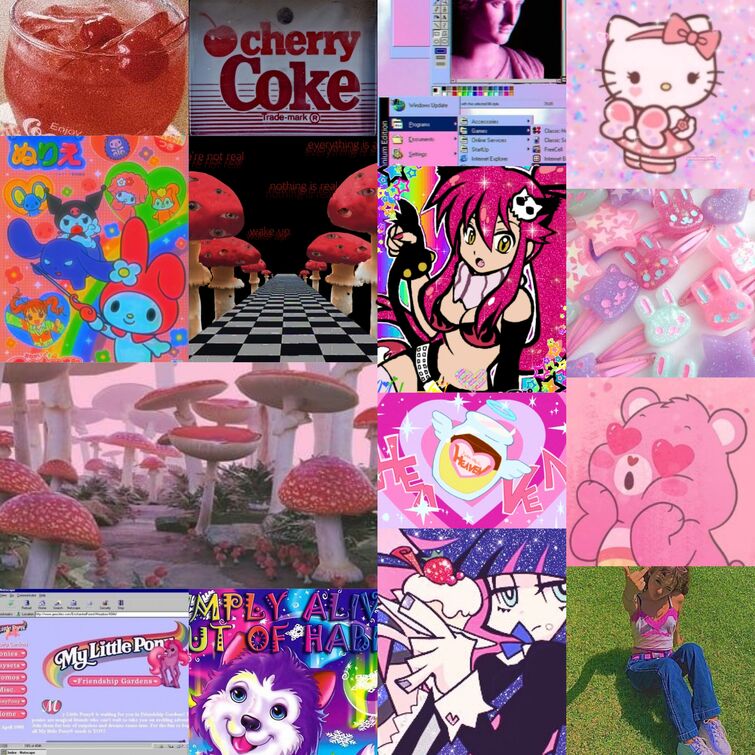 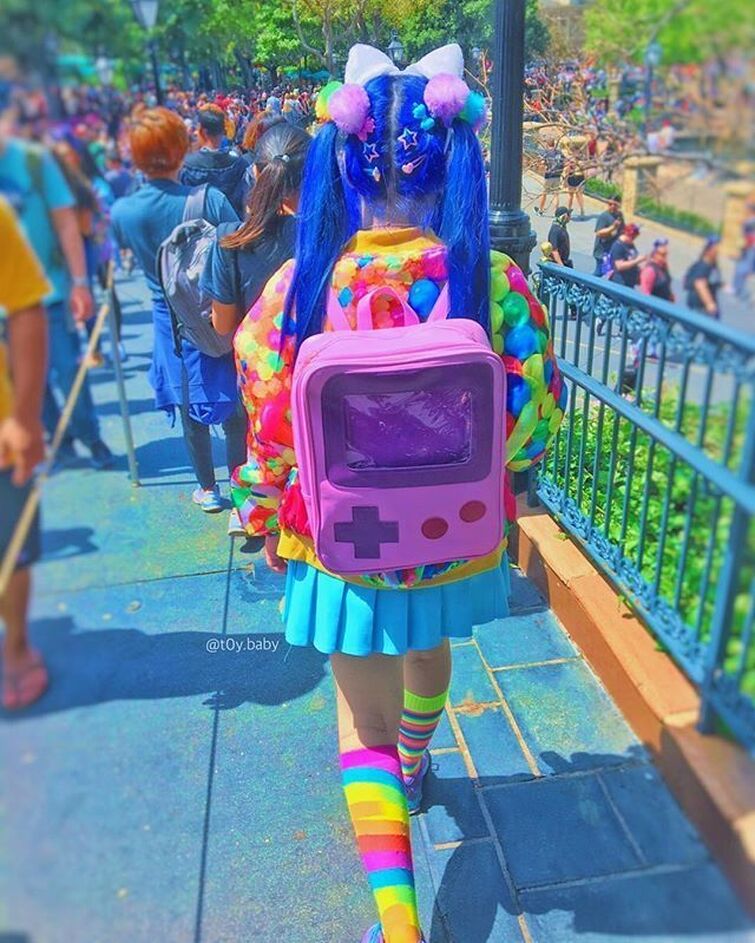 What aesthetic is this? I'm assuming this is kid core but I may be incorrect...

Ok, so I'm a gamer that makes content that revolves around cute things and creepy things. and I was wondering what aesthetics fit into those two categories?

What aesthetics revolves around gaming?

Hey! I've been watching this wiki grow for a few years and I absolutely love the amount of pages on here. I spend hours just going down rabbit holes and I pretty much know my main aesthetics and dream aesthetics... But one half of my aesthetics don't seem to blend very well with the other... I know that sounds kinda strange but after I explain them, it should make a lot of sense. It needs to have a focus on pets, especially V and E pets... Which I will touch on at the bottom

I love mostly all cyber/y2k/electronic/nostalgia aesthetics... but I also love nautical and a few academia aesthetics (vibrant academia and Lisa Frank school supplies)... and I feel like there should be an overlap somewhere, and I think it's cause I grew up on the east coast... there's a certain kind of nautical aesthetic that is really romanticized in 2000s movies, especially teen ones, about the coast, going to the beach, the mall, etc... but it isn't really tropical, it's more nautical!

Think of movies like Aquamarine or especially the show Hannah Montana! I've always loved beaches, and grew up enjoying the aesthetic of the ocean... so Seapunk kinda fits but it's a bit too clubby, a bit edgier, etc. I'm looking for something more nostalgic and has a much more innocent philosophy about childhood. Also less of a focus on the ocean itself and focuses on things themed with the ocean, think of the Baltimore aquarium, old screensavers, those tropical shower curtains with fish on them we all had, and those trippy lamps that just have fish going around and around... Dude, I'm getting nostalgic just thinking all this...

Plus it needs to be modern, but, in a retro futuristic way... think of Childhood Zen Kawaii (not sure if I got the name right but I love that aesthetic!) and straight up Frutiger Aero... I notice a lot of electronic/vaporwave aesthetics will ALMOST hit that mark... but have more of a focus on the ocean itself, rather than a modern tropical city. Frutiger Aero for sure almost hits the mark perfectly but needs more of that Disney channel taste.

So basically, nautical, but modern. Nostalgic for old technology, very retro-futuristic. A little sprinkle of vibrant academia and Lisa Frank yet clean and minimalist, a little bit corporate, maybe in a Wii aesthetic way...

As for V pets and E pets... I feel like this just fits in with the aesthetic.. SO many electronic pet franchises were pushed at the time... especially around Christmas. Tamagotchi, Petz by PF magic, Neopets... and just pet trading/breeding sites in general. Pet games, such as Nintendogs and Sims 2 Pets' (and all its ports specifically for Pets) E pets, such as furbies, furr real friends, aquapets, I-dog, D-rex... This is also when Monster Collecting HIT THE WEST HARD!!! SO I feel like pets go into this more than anything.

Virtual pets and LCD devices still have thriving communities, so I wanna really articulate the feel of "enjoying them as a child in 2006"... These people, no doubt, would SO resonate with the aesthetic and probably feel the same nostalgia.

People also could not get enough of pets in all media... this is when pet memes rose to fame (Can I haz cheezburger) and movies about talking dogs were just pumped out constantly, and this where it blends with teen movies for me. Like Beverly hills Chihuahua. Rich Y2K girls always had to have a "little poopsie" in their pink bags while at tropical looking malls, so that's why this stands out to me. Merch brands such as The DOG, and The CAT (those stuffed animals with big heads) were popular.

A strong focus on "2000s teen media" such as Disney channel sitcoms, going to the mall, bopping "Year 3000" by Jonas Brothers on your iPod while you grab your nautical woven beach bag to go play some volley ball in the muggy ass weather or some hot cloudy beaches... not sunny beaches... but cloudy beaches, that somehow just speaks to someone who grew up on the coast.

Sorry if I sound kinda dumb and rambling! I'm trying my best to just channel my pure nostalgia and mental imagery.

So here's my idea, I think I've created two different aesthetics, I will call it Coastcore/beachwave or something just like nostalgic nautical... and that's the modern, retro futuristic tech side of things. Basically just Frutiger Aero mixed with Nautical, and needs a heavy focus on teen media at the time, malls, and stuff with reef fish plastered on it. This aesthetic just smells like linen air freshener and woven laundry baskets!

The other Aesthetic is basically lisa frank mixed with corporate cleancore, and also Frutiger Aero, but focuses purely on v pets/toy pets/merch with quirky animals on it and old cat memes. Very strongly Childhood Zen Kawaii, but with a focus on Petz/Neopets... I feel like this is too specific to be its own thing but is also too specific to just fit with my other idea of "Coastcore" This aesthetic smells like static, the plastic of your childhood PC as you logged on various games or websites to feed virtual pets.. we all had them. Even on social MMOs or on MMORPGs, we all had one just following us around. I'd call it PetCore... and it screams old pokemon, petz, and nintendogs. Definitely ties in with old web aesthetics but it needs to be its own thing. The 2000s was obsessed with pets in a very oddly specific manner. Whatchu think? :3

I'll be honing these two aesthetics and searching for pictures to fit, right now I have the perfect mental imagery but I need some help articulating my thoughts!

Oh and the philosophies of both would have to be more positive, maybe there's a bit of bittersweet sadness, but I don't want something depressing... I want something that's like "This was my childhood, I'm glad it happened. I have good memories I want to hold onto forever, and I'm happy I made it this far" I feel like there's a lot of aesthetics with darker philosophies and I want those people to have their own spaces. My aesthetics are chaotically positive which I feel compliments the darker ones such as Traumacore and the darker sides of Vaporwave.

For those who didn’t know, Cruelty Squad is the tactical immersive sim first-person shooter independently developed by Consumer Softproducts. It is an immersive power fantasy simulator with tactical stealth elements set in a sewage infused garbage world where you play as a emotionally-detached assassin with David Cronenberg-style bio-augmentations working for the eponymous organization.

The game gained a massive spike in popularity when popular video game reviewers such as GmanLives, Civvie 11, Zero Punctuation, and even Dunkey made their own video on it.

Perhaps one of the most unique and infamous features Cruelty Squad has are the deliberately garish, eye-melting graphics consisting of a vomitous blend of bright colors, and low-resolution textures resembling an old computer malware from the 1990s, all while combined with extremely surreal and trippy visuals influenced by underground, ultra-violent video games from the early 2000s. The soundtrack is not much better; many of the songs feature jarring synths mixed with disgusting squelching sounds that sounds like something out of a glitched-out surreal parodies of old-school edutainment games such as Baldi's Basics in Education and Learning.

However, despite its intentionally “messy” art-style that looks and feels like someone's bad acid trip after consuming a gallon of LSD and other hallucinogenic drugs, Cruelty Squad is unironically a really enjoyable and great game (it has “Overwhelming Positive” reviews on Steam) and I actually highly recommend playing it by yourself. Just keep in mind that you should have a corporate mindset to enjoy these types of games.

Here are all the screenshots of Cruelty Squad: 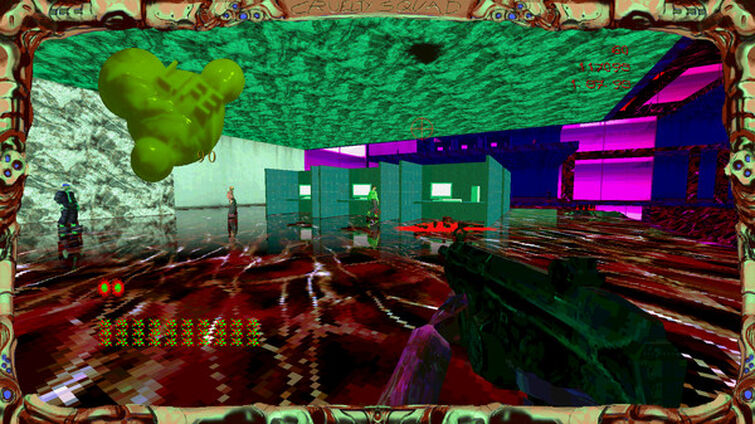 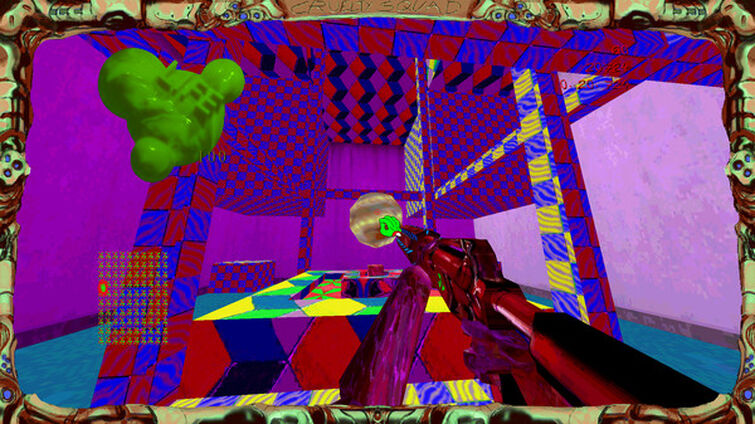 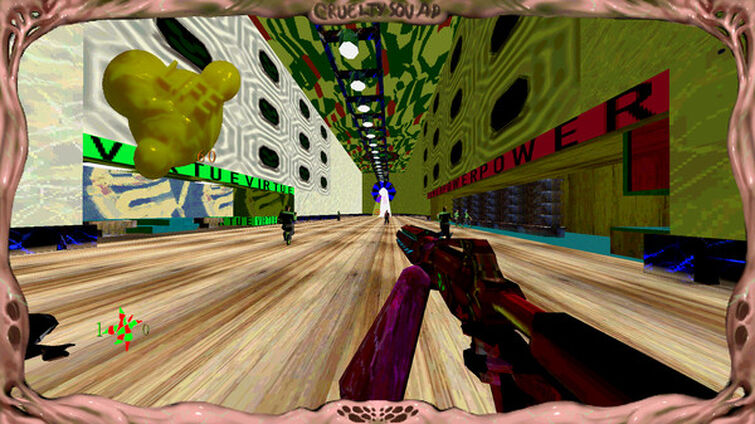 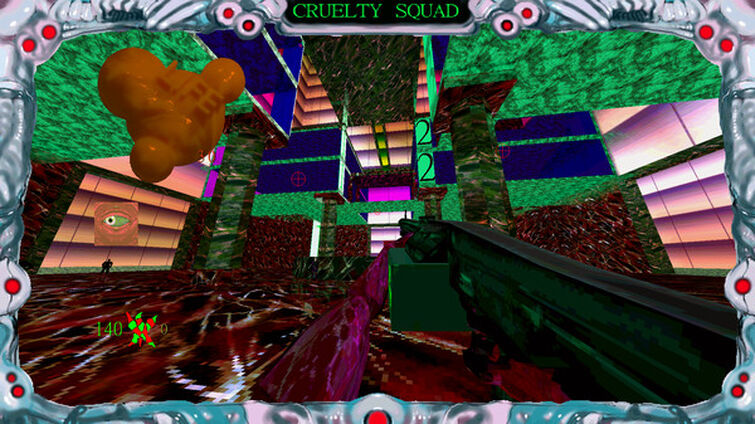 I’m not actually sure what Cruelty Squad’s psychedelic and weird aesthetics was supposed to be, though it could be possible that the game would most likely be somewhere between the lines of either Vaporwave or Weirdcore. 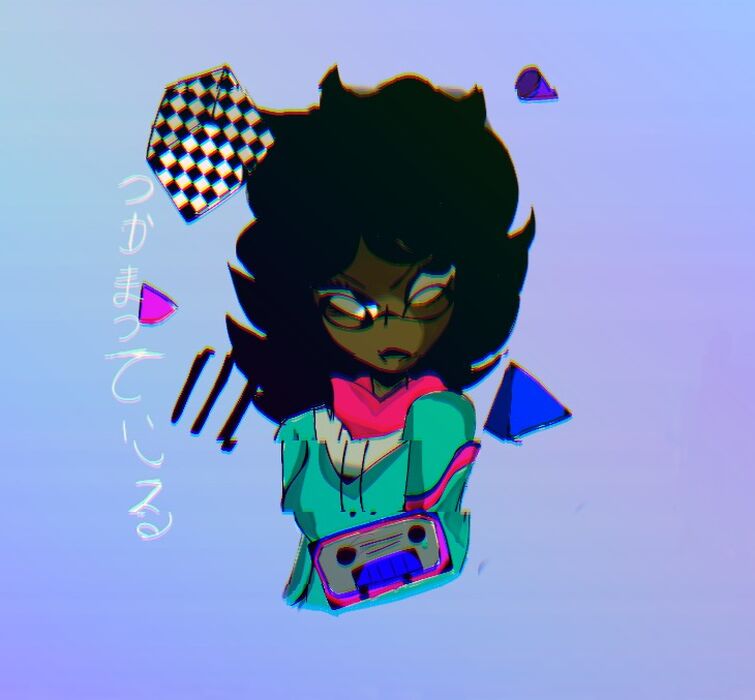